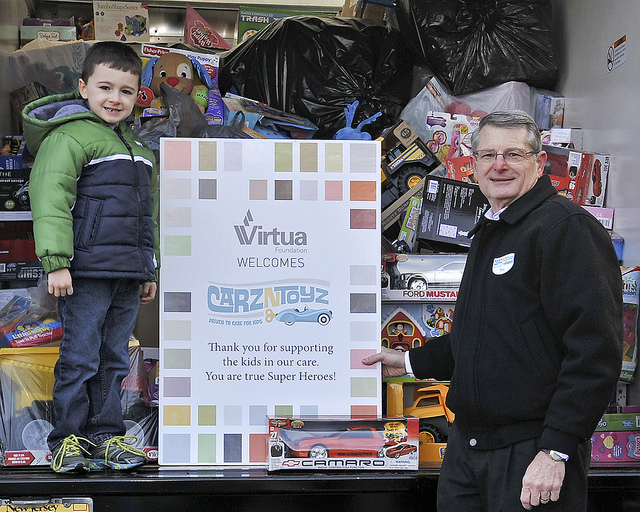 If you were on Route 70 around 10 AM Saturday the 7th, you saw it. Spectators emerged from their places of business and gathered along the road to watch as nearly 100 cars and trucks from Ferraris to Fords, led by the Cherry Hill police, passed by. Their mission: To deliver over 1,000 toys and 400 books to the children at Virtua.​

Upon arrival at the hospital, a human chain of more than 50 Carz N’ Toyz supporters relayed the toys from the truck to the hospital. Several children were present and by the looks on their faces, it was as if Santa himself had arrived. No words can express the importance of the joy you all helped bring to the children.​

Inside the hospital, a brief ceremony was held highlighted by a $10,000 check presentation from Carz N’ Toyz President, Sam Lacroce to Virtua CEO, Richard Miller. The money goes to support  concussion Impact testing for  young athletes. Carz N’ Toyz is proud to be associated with Virtua and the good they do throughout South Jersey.​

“It gets bigger every year, said Lacroce. People were coming out their stores and offices and standing along Route 70, watching the caravan. But the best part is seeing the smiles on the faces of kids who need to get well.”​

As always, the cavalcade began at Aldo Lamberti’s with coffee and a continental breakfast. Our heartfelt thanks goes out to Aldo for his continued support and generosity as well as to all our supporters, those who attended and those who could not. Thank you all. From all of us at Carz N’ Toyz, best wishes for a happy, healthy holiday season.